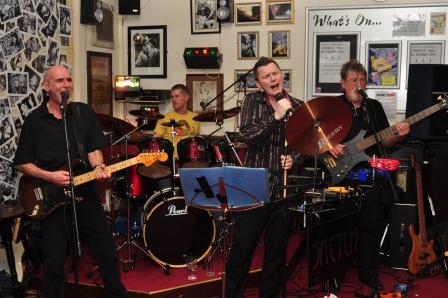 SKETCH are a four piece band playing rock & pop covers from the 60’s through to todays music. The Sets include songs by The Beatles. Stones, Roy Orbison, Shadows, The Jam, Razorlight,Snow Patrol, Motown, etc

You will also be able to meet some of the crew from the Windsor & Eton Brewery at numerous times during the festival.
Rebecca from Hensting Brewery will also be making an appearance at the festival on Sunday.

The club is struggling with the five real ale hand pulls so we have had two more fitted ready for this festival.

Whistle Blower 5.0% ABV – designed and brewed by Julie Jones who has just passed her final test to become a driver on the Watercress railway line (she has worked as a fireman on the line for a few years).  That makes her one of the few qualified lady train drivers in the UK. New
Cheriton Porter 4.2% ABV – Dark brown/black with a creamy coffee aroma, a hint of sweetness in the mouth along with roasted chocolate maltiness, and a dry finish. Award Winning.

Celebration – 6.0% ABV – Belgian Chocolate Stout, produced especially to celebrate Richard & Julie Griffin’s 10th wedding anniversary, this is a one off and will not be reproduced again due to the cost, two firkins only. – ! New and Exclusive !
Indianapolis – 5.5% ABV – A slightly hazy American IPA brewed with Belgian yeast for extra flavour and depth.
Griffin – 5.5% ABV – An intensely hoppy copper-coloured strong bitter with a powerful fruity aftertaste. New
Sump – 7.0% ABV – A festival favorite, This multi-award winning Imperial stout bursts with intense flavours and is a joy to drink.
Hop – 8.0% ABV – (projected to be 500 EBU’s) The world’s bitterest bitter as recorded in the Guinness Book of Records. Details

The Bitter End – 3.4% – We rose to the challenge of getting bags of flavour into a low gravity beer. Deep amber with a red hue and an insane amount of Styrian Golding hops in this quaffing ale both on the nose and on the palate; fruity and full, bitter yet sweet. New
Midnight Rambler – 3.9% ABV – An old fashioned milk stout based on an original 1930’s recipe

Spikes British thought for the day:

A recent study conducted by Oxford University found that the average Briton walks about 900 miles a year.
Another study by the British Medical Association found that Britons drink, on average, 22 gallons of alcohol a year!!
This means, on average, Britons get about 41 miles to the gallon.

Kind of makes you proud to be British doesn’t it!